← more from
Third Uncle Records
Get fresh music recommendations delivered to your inbox every Friday.
We've updated our Terms of Use. You can review the changes here. 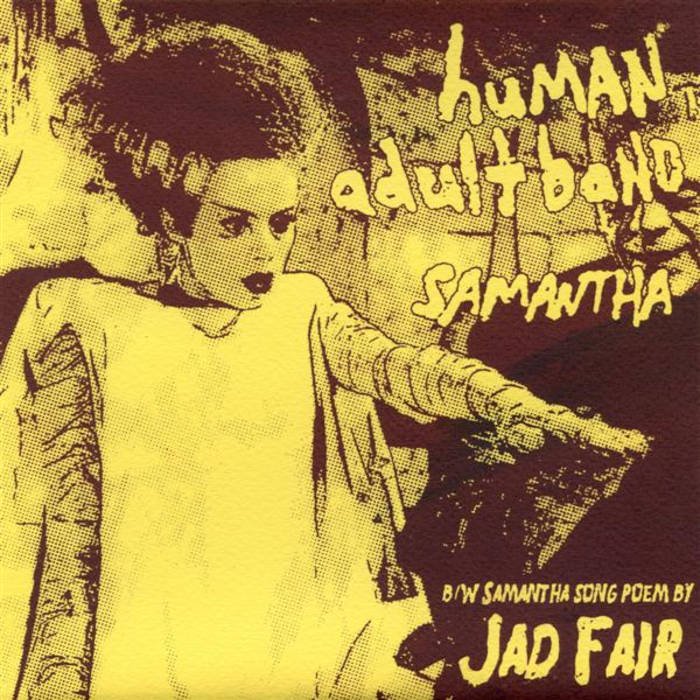 from The Wire, June 2010 in Size Matters by Byron Coley

This one’s been out a while, but it just showed up and it’s such a corker, who can resist its charms? The Human Adult Band are one of New Jersey’s most fully splanged zombie outfits, and their jamming sludge has a distinct mid-period Jandek flow on the vocals here, which is a damn nice touch. On the flip, Half Japanese’s Jad Fair takes what is reportedly the same song, and welds its lyrics to a loopy cartoon soundtrack.

Tangled in my attempts to properly praise Third Uncle Records for the very fine release of Elephant Micah’s ‘Exiled Magicians’ – a disc played through many times yet never in front of a slate – I’m glad to give them a timely nod for this ballsy release. Sounding like plausible contemporaries from any number of the musical eras which the latter has inhabited, the marriage of Human Adult Band to Jad Fair is in this moment as wonderfully freaky as the prior’s precocious discography. Despite their widely-evident skills, the proclivities of Human Adult Band for sludge and slack (sonically and otherwise) make them unlikely candidates for a young, legit label to tie to such a renowned name in their catalog, and then as a 7”. Trevor Pennsylvania doesn’t bark as much as barf his lyrics, like an Arto Lindsay with a swollen tongue. Steady, clean rhythms are therefore doubly violated by the dueling break squeal guitar which skips on a layer just beneath the surface of the disc. Handling the common subject of “Samantha” with inarticulate enthusiasm, the band resembles not just the Atlantic coasting post-punk of the early 80s, but more so the Midwest of Tar, God & Texas, or Cows. On the reverse, Fair constructs a fresher-by-comparison oddity of spoke-sung lyrics and toy-jazz band atonal pop, xylophonic and populated by bird sounds. He recites in jagged poetry over a walking bass line, and there’s this feeling a great weight despite the shimmy in with each verse. Black vinyl comes in handsomely-printed construction paper sleeves, stamped to some unknown quantity greater than 142 copies and recommended for sure.

from I Must Find Atlantis

Amazing 7" by Jersey shredders Human Adult Band gets backed by guru of alternative creativity, Jad Fair. The Human Adult Band (who credit themselves as the writers of the song Samantha), play their version as
something between the discordant guitar slicings of Jandek, and the primarily [unintelligible] yet melodic vocals of The Fall's Mark E. Smith. Once you are satisfied with their vision, you flip over the record to hear the driving force of Half Japanese's Jad Fair busting out his creepy rendition. Imagine the opening theme to Pee Wee's Playhouse - slow samba/island beats with birds chirping, whistles and Jad's famously distinct vocals. Great stuff.

HUMAN ADULT BAND is a long-running (since '02) collective style noise rock, no wave & drone rock band based out of New Brunswick, NJ. 'Gross fire' as Inzane Johnny of Wolf Eyes puts it. Performed by stooges raised on 'Jolt Cola and Mad Magazine' spouts Matt Korvette of Pissed Jeans. Chug the gunk and be in a stupor (and a little more deaf) as Human Adult Band explore the outter realms of rock. ... more

Bandcamp Daily  your guide to the world of Bandcamp

The Hammer and The Relentless from the Boston band Malleus stop by for a chat.